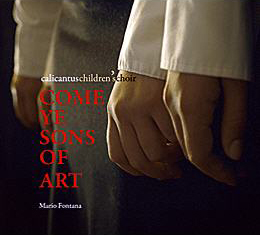 Come ye sons of art, away

The CD “Come ye sons of art”, besides being a very important recorded work, is part of the choir’s humanitarian activities: a large part of the proceeds from sales is donated to Médecins Sans Frontières for projects aimed at improving and stabilizing the level of nutrition of children in some African countries. In 1999, Médecins Sans Frontières received the Nobel Peace Prize; it offers emergency medical aid to people in danger.

For a total of 75 minutes of music, Calicantus’s album represents the completion of a pedagogical-artistic project started in 2003 that includes exploring the expressive potential of the chorus of children’s voices in the interpretations of Baroque works and some authors of the eighteenth and nineteenth centuries, as well as the exploration of Ticino and Swiss folklore, a true cultural heritage, admirably enhanced by young Locarno choristers.

On the popular side, in addition to the splendid “La bella la va al fosso” and “O, ra valmaggina,” or the poignant interpretation of “Signore delle cime” recorded at the Swiss competition won by the choir last year, the album presents works by Swiss composers such as Pierre Kaelin and the Ticino composer Ivo Antognini.

Of the latter we find “Great Spirit,” a prayer invoked by the Lakota, Native Americans of the plains; “Wah-bah-dah-bah-doo-bee”, dedicated to the musician Marco Fratantonio and “Schwyzzerapsody,” a very original piece using Swiss place names, all performed as world premieres by the choir and recorded live at the Copenhagen Opera during the recent World Symposium of choral music.

The ode “Come ye sons of art” by Henry Purcell, which gives the title to the record, is an exquisite example of Baroque vocalism that Calicantus manages to offer in a captivating and prestigious way.

The musical journey of the disc then proceeds with authors of the classical tradition. Bach, Myslivecek, Dvořák and Fauré, performed with extraordinary elegance.

Here, then, is the choir becoming a living voice, interpreting sound in expressive and gestural patterns “of other times” as a reference to profound emotions, human and universal.

There are also references to pop music, such as “Vois sur ton chemin” or “Ticket to Ride” by the legendary Beatles.

In this excellent record we find enthusiasm, research and great fragrance of singular proposals synthesized in a fascinating and complete musical path; a work of children for children, music as a gift to future generations.

A result that rewards the magnificent parable of the choir, almost twenty years of self-sacrifice at the service of research, which incorporates rigour, will and dedication.

Thus, a climax of uniqueness and inspiration was born, an authentic ray of vocal testimony to draw upon. A world of wonderful memory for timeless listening. A little gift for the heart and soul, that is the meaning of this recording. And the simple enchantment that fleetingly remains in deep memory.

The choir’s 3rd CD “Come ye sons of art”, was recorded live between May 2001 and May 2002 during concerts and tours in Switzerland and Italy. It contains 18 songs, divided into 6 groups according to style.

After the successes at the Vancouver and Basel Festivals in 2001, the Italian tour of May 2002 and various other concerts in Geneva, Fribourg and Locarno, the choir consolidated its capacity for movement, choreography and light and natural expression. This album highlights its freshness and underscores an important milestone not only because it was published for the celebration of the choir’s 10th anniversary, but also because of its versatility.